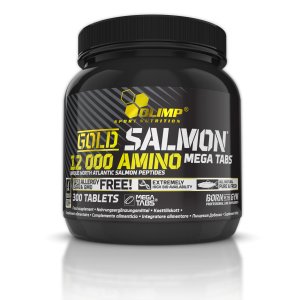 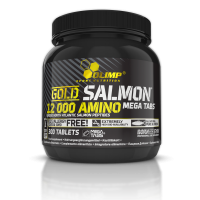 DESCRIPTION
COMPOSITION
PURPOSE
RECOMMENDATION
DOWNLOAD
The nutritional requirements of physically active people are much higher, both in terms of the quality and quantity of consumed food, compared to those not involved in any physical activity. The fundamental problem that makes it harder to meet these requirements is the use of low-quality sources of protein, especially relying, to a large extent, on those of plant origin. It is known that proteins of animal origin are the most valuable in the context of amino acid composition and biological value (BV). Physically active people should base their diet on these proteins.

The most significant differentiators of Gold Salmon 12000 Amino Mega Tabs®, which give it an advantage over other amino acid products, are:
1) it contains extremely high hydrolysed North Atlantic salmon proteins (ProGo™), resulting in its instant absorption and maximum limitation of the protein’s allergenic effect,

Allergic reactions are usually caused by proteins with a weight of 10 kDa or more. Research shows that the largest proteins in ProGo™ do not exceed 6.4 kDa. This is the reason why this hydrolysate is classified as hypoallergenic, which means that there is little risk of it causing any hyperresponsiveness of the immune system.

ProGo™ is characterised by instant absorption due to the unique degree of hydrolysis (50% of peptides have a molar mass of less than 1000 Da and the weight of 99% of peptides does not exceed 3000 Da). Thanks to such a product development ideology, the bioavailability of nitrogen in the amino acids is higher by 79 %, 74% and 20% compared to, respectively, whey protein isolate (WPI), low (WPH-Low) and high hydrolysate of whey protein (WPH-High) (Fig.  1). Furthermore, as shown in Fig. 2., the absorption of nitrogen is much more effective and lasts longer than in the case of other comparable protein sources. Thanks to this muscles are saturated with amino acids much more fully.

Fig. 1. The bioavailability of nitrogen from amino acids of different protein sources. 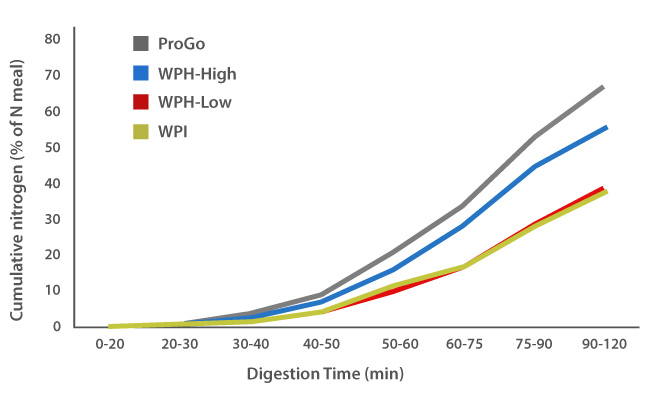 Fig. 2. The effectiveness of cumulation/assimilation of nitrogen from amino acids of different protein sources as a function of digestion time.

2) has a high content of exogenous amino acids (EAA), including BCAA,

- L-arginine (Arg). The content is 3 times higher than in whey proteins. Although L-arginine is a relatively exogenous amino acid, its internal biosynthesis is not able to compensate for its insufficient supply from food in states of increased demand (i,ii), such as increased physical activity or damage of the body caused by disease or injury.
It has been proven that L-arginine: increases the synthesis of growth factors (poliamines) participating in the growth of tissue, and, as proven by clinical research, promotes protein synthesis in the body. Together with glycine and L-methionine it is also involved in the synthesis of creatine. In scientific literature we can find reports on the impact of Arg on the increase of secretion of the growth hormone (clinical tests on healthy men; iii)

- L-proline (Pro). The content is approximately 6 times higher than in whey proteins. The most important, from the point of view of using this amino acid in bodybuilding and sports, is undoubtedly the ability of Pro to regulate mTOR kinase activity (iv ), which integrates many important signaling pathways initiated by important factors, such as insulin or insulin-like growth factors (IGF I and IGF II; v, vi, ) Other studies (vii) show that the increase in proline content in the diet by 2.1% results in an intensification of daily body weight gain from 342 to 411 g/day, which is 20 %! The reason for such a substantial change was the increased retention of nitrogen in the cells caused by Pro - from 1.27 to 1.53 g/kg of body weight.

4) research shows that ProGo™, administered for 42 days at a dose of 16g/day, causes an increase in the level of hemoglobin by 14.9% and reduces the BMI by 5.9% (viii), thus it has an important role in the prevention of obesity and anemia,

5) ProGo™ has been produced in a way to reduce the fish smell to a minimum,

- a very high dose (1500 mg) of instantly absorbable amino acids in one Mega Tabs® tablet. Ultra concentration - 88% of the mass of the whole tablet,
- contains a complete profile of proteinogenic amino acids with a significant proportion of exogenous amino acids (EAA), including branched-chain amino acids (BCAA), characterised by a strong anabolic and anti-catabolic effect
- minimal fat content (less than 0.1 g) per recommended portion,


# Aminogram values may be subject to biological fluctuations typical for natural products.

Purpose: This product is intended for adults seeking to supplement their diet with high-quality protein.
Recommended daily dose: 1 - 2 portions per day. 1 portion (4 tablets) during the meal with plenty of water. 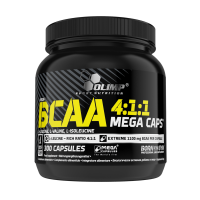 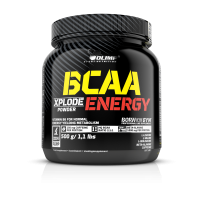 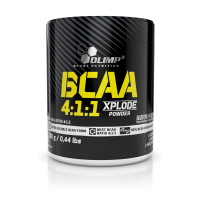 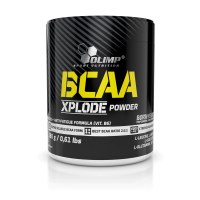 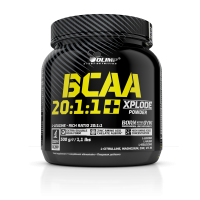 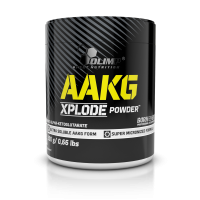 A dietary supplement with a high content of omega-3 with vitamins D3 and K2. Premium fine concentrated cold-water fish oil with a 65% standardised content of omega-3 fatty acids supplementing the diet with essential omega-3 fatty acids. Gold Omega 3® D3+K2 also contains a high amount of natural vitamin K from natto, featuring in its most digestible and active form - menaquinone-7 (vitamin K2). The product has been supplemented with ... 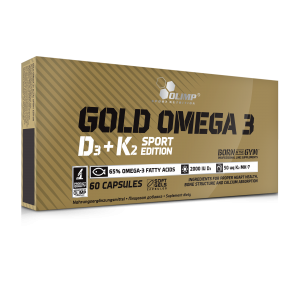 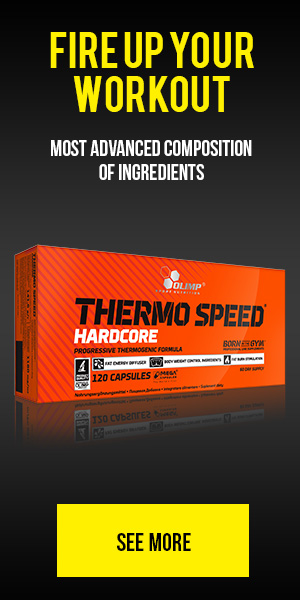