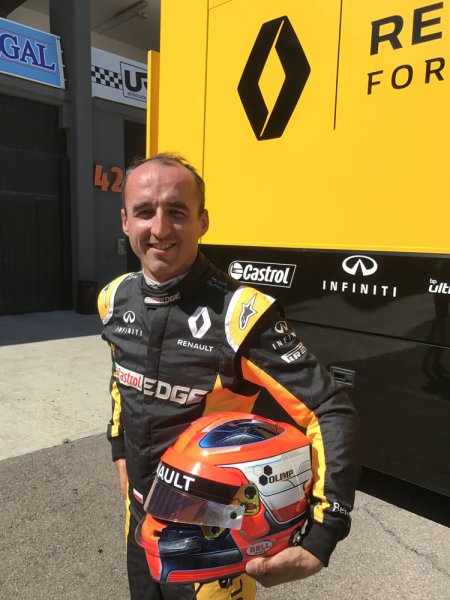 The best support the best. The Olimp Sport Nutrition brand supports Robert Kubica, one of the top racing drivers in the world.

Robert is the most titled Polish racing driver. After achieving success in karting and races in other categories, he started his Formula 1 career. In a short period of time, he became known as one of the best racing drivers in the world, with 12 podium finishes and winning the 2008 Canadian Grand Prix. In 2011 he suffered a serious accident which halted his career for two years. In 2013 he returned behind the wheel of a rally car, winning the WRC-2 World Championship.
Towards the end of 2016 Robert drove as a guest with the Olimp Racing team, testing a Porsche 911 GT3 R at the Circuit de Catalunya track. Everyone in the team was greatly impressed with his driving style. “Robert set the bar so high that it became our dream to engage him with our team for the 24-hour race in Dubai, at which Robert never raced,” said Marcin Jedliński, vice president of Olimp Laboratories sp. z o.o., also a racing driver, of the Olimp Racing team. Robert was also a driver of the team during the 24-hour race in Dubai.
On June 6, 2017, the Polish driver took part in a private Formula 1 car test, organized by his former team Renault Sport Formula One Team. He drove 115 laps in the F1 car, setting excellent times. It was during this test in Valencia that Robert drove with the Olimp Sport Nutrition logo on his helmet and on the car, this confirmed the company's collaboration with this brilliant driver.
“Now our partnership becomes a reality! We are very glad that we can work with Robert. We will be cheering for him to get back to racing in Formula 1 as soon as possible,” said Stanisław Jedliński, President of Olimp Laboratories sp. z o.o., owner of Olimp Sport Nutrition, who is also a racing driver and passionate about racing.
Robert Kubica said, “I am very proud about this partnership with OLIMP. As my personal supplier of supplements over the last few years, this is a natural progression of our collaboration. OLIMP, with their products, has been a key element of my training program and has helped me to improve my physical condition and be ready to come back in a F1 car. I would be proud to help OLIMP to continue building its global expansion as they help me to reach my performance targets. We share the passion in trying to achieve the best possible standards as shown during my F1 test in Valencia where OLIMP products enabled me to meet the demanding requirements of a F1 car. I look forward to a successful partnership.”
The Olimp Sport Nutrition brand is owned by Olimp Laboratories sp. z o.o., a Polish pharmaceutical company founded in 1990. The Company operates within a capital group, which includes Nutrifarm Sp. z o.o., a branch in Germany, and companies in Italy, Spain and the USA. As part of the long-term development strategy, the company launched a Research and Development Center in 2015  - one of the most innovative in the world in the field of dietary supplements and pharmaceuticals. Through continuous investment in research and development, it is possible to produce the highest quality products. This in turn means that the company operates on a global scale and become well known throughout the world.
“The highest standards have always been number one for us. We didn’t take any compromises as a result of which quality would suffer. The best work with the best, that is why Olimp Sport Nutrition strengthens its partnership with Robert Kubica, which has been in effect for quite some time. We are delighted that we can support him in his endeavors so he can permanently return to Formula 1 racing. We are sure he will succeed!” said Olimp’s president Stanisław Jedliński.

BACK TO THE EVENTS  ›